This tree grows to 10–13 m (40') high with a dense crown of thorny branches and an ash-grey trunk. The leaves are 5–10 cm in length and often drop in late summer due to defoliation by various leaf fungi. The tree seems to suffer little from the early loss of its leaves, as is common on many hawthornes and crabapples. Among the earliest in the genus to bloom, downy hawthorn also has earliest ripening fruit, which decorate the defoliated tree in late summer and early fall which is quite attractive. It is closely related to Crataegus submollis, but the two species have separate native ranges. Amongst other differences between these two species, C. submollis has approximately 10 stamens, whereas C. mollis has approximately 20 stamens per flower.

The white flowers are borne in clusters at the end of the branches in spring. The bright red edible fruit ripens in late summer and early fall and falls soon after.  This native tree is beautiful, but is prone to the cedar rust, so if that is a concern, it should not be grown near red cedar trees, which harbor the winter/spring phase of the rust.

The sharp thorns can be an annoyance, but they are less prominent than those of other hawthornes.

This species is uncommon in cultivation. 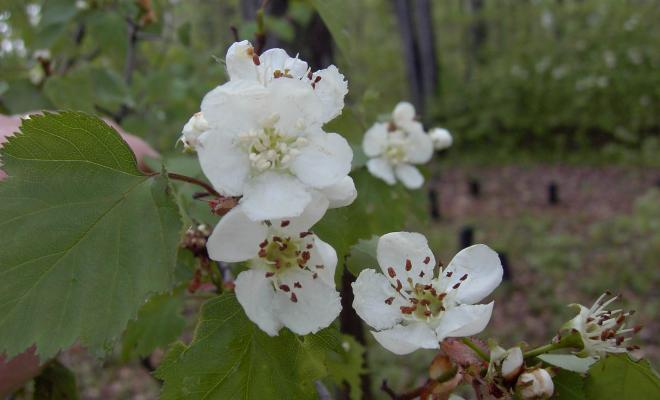