Diospyros virginiana, commonly called the American persimmon, or common persimmon. It ranges from New England to Florida, and west to Texas, Louisiana, Oklahoma, and Kansas. The tree grows wild but has been cultivated for its fruit and wood since prehistoric times by Native Americans.

D. virginiana grows to 20m (66 ft), in well-drained soil. In summer, the tree produces fragrant flowers which are dioecious, so both male and female plants must be grown if seed is required.  The flowers are pollinated by insects and wind. Fruiting typically begins when the tree is about six years old.

The fruit is round or oval and usually orange-yellow, ranging to bluish, in color and from 2 to 6cm (0.79 to 2.4 in) in diameter. In the American South and Midwest, the fruits are referred to as simply persimmons or "simmons", and are popular in desserts and cuisine.  The fruits are astringent before frost which renders it somewhat unpalatable, but after it has been subjected to the action of frost, or has become partially rotted or "bletted" like a medlar, its flavor is much improved and is quite sweet and aromatic.

The dark colored bark has a strongly checkered appearance and can sometimes be confused with the bark of black gum.

It has often pendulous branches, which form sometimes a broad and sometimes a narrow round-topped head. The roots are thick, fleshy and stoloniferous. It is often given to forming clusters of plants from root sprouts. The tree has oval, entire leaves, and unisexual flowers on short stalks. In the male flowers, which are numerous, the stamens are sixteen in number and arranged in pairs; the female flowers are solitary, with traces of stamens, and a smooth ovary with one ovule in each of the eight cells—the ovary is surmounted by four styles, which are hairy at the base. The fruit-stalk is very short, bearing a subglobose fruit an inch in diameter or a bit larger, of an orange-yellow color, ranging to bluish.  It is surrounded at the base by the persistent calyx-lobes, which increase in size as the fruit ripens. 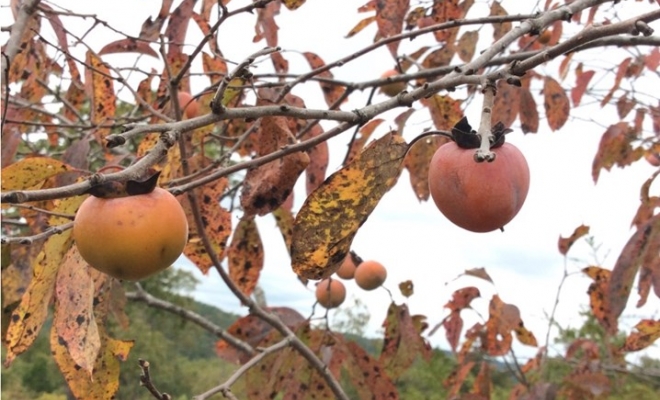