Ilex opaca, the American holly, is an upright, pyramidal, evergreen tree that slowly matures to 15-30' in cultivation, but may reach 50' tall in the wild. It is native to the eastern and central U.S., most frequently found in moist woods, forest bottomlands and swamp peripheries plus some coastal dunes (e.g., Cape Cod down the Atlantic Coast) from Massachusetts to West Virginia to Ohio to southeastern Missouri south to Texas and Florida. This species is easily identified because it is the only native U.S. holly with spiny green leaves and bright red berries. This is the Christmas holly whose berry-laden boughs are typically collected at Christmas time each year for ornamentation ("decking the halls" as it were). Thick, leathery, deep green leaves (2-4" long) have spiny marginal teeth. The species is dioecious (male and female flowers are on separate trees). Greenish-white flowers bloom May-June (male flowers in 3-12 flowered clusters and female flowers solitary or in 2s or 3s). Bright red or orange fruits (drupes to 1/4- 1/2" diameter) ripen in fall on pollinated female trees, and persist on the tree through winter. Birds love the fruit.

It is easily grown in average, consistently moist, acidic, well-drained soils in full sun to part shade. Leaves will typically yellow in alkaline soils, and it tolerates a broad range of soil conditions, but will not tolerate flooding or soils saturated with moisture. Avoid poorly drained soils. Best growth in the wild usually occurs in rich bottomlands and swamp margins. Site in locations best protected from cold winter winds. Part afternoon shade is best in hot summer climates. Plant foliage loses density in too much shade.

Plant as specimens or in groups. Foliage provides excellent color for the winter landscape, and cuttings of the same are popular additions to Christmas wreaths and decorations. Berries are attractive and a good winter food source for birds. Very nice in woodland gardens.

We carry "Satyr Hill', which we believe to be the most elegant American Holly, as it has very large, lustrous leave and large numbers of rich, red berries that last most of the winter.

Back to Previous Page 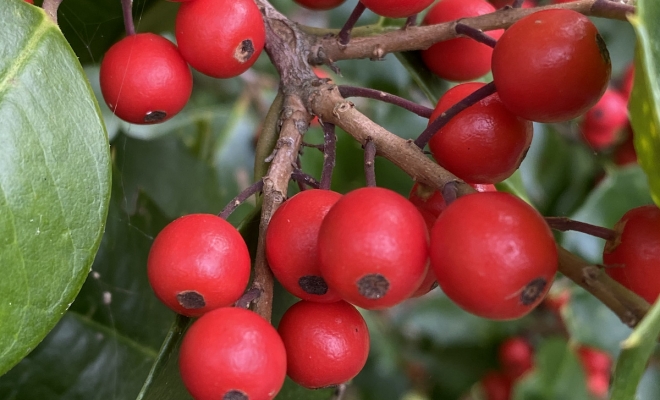