Ilex verticillata, or winterberry holly grows as a moderately upright, large, rounded shrub. Grown mainly for its winter color and value.  The females are laden with bright red berries and the songbirds feed on them in late winter, after successive freeze/thaw cycles have softened their starchy berries.  Must have acid soils, and can tolerate wet feet. Dark green leaves often with purple edges, especially when opening in the spring, yellow autumn color.

This holly species is native to eastern North America in the United States and southeast Canada, from Newfoundland west to Ontario and Minnesota, and south to Alabama.

The species occurs particularly in wetland habitats, but also on dry sand dunes and grassland. The berries are an important food resource for many bird species, typically later on in the winter as the berries are starchy and are more digestible to birds after several freeze/thaw cycles.  We have observed bluebirds eating them as early as Novemeber, though.  Lindera benzoin, or spicebush berries are prefered early in the fall due to their oily, high energy content.

Ilex verticillata is a shrub growing to 1–5 metres (3.3–16 ft) tall. It is one of a number of hollies which are deciduous, losing their leaves in the fall. In wet sites, it will spread to form a dense thicket, while in dry soil it remains a tight shrub. The leaves are glossy green, 3.5–9 cm long, 1.5–3.5 cm broad, with a serrated margin and an acute apex. The flowers are small, 5 mm diameter, with five to eight white petals.

The fruit is a globose red drupe 6–8 mm diameter, which often persists on the branches long into the winter, giving the plant its English name. Like most hollies, it is dioecious, with separate male and female plants; the proximity of at least one male plant (some say, within a quarter mile) is required to fertilize the females in order to bear fruit. We currently carry 'Red Sprite' which is a heavy-berried dwarf variety.  'Winter Red' is heavy berried and slightly taller, but smaller than the species.  "Winter Gold' is a lovely shade of orange-gold. 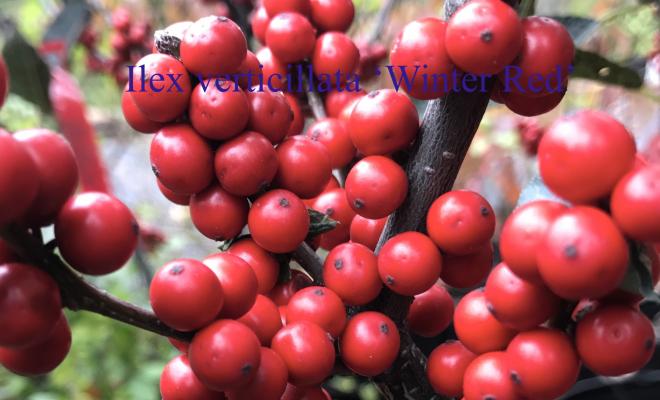