If you would like a lovely vine to cover a trellis or a wall each year, this selection is a real stunner-in-the-summer. Every day, from June through August (Sept.), this beauty will delight your visual field, as long as the sun is out.

Ipomoea pandurata, commonly called wild potato vine, man-of-the-earth, man root and Indian potato, is a vigorous, twining or trailing perennial vine of the morning glory family that grows to 15-30’ long on smooth to slightly pubescent, sometimes purplish stems rising from a vertical, starchy root system that matures over time to as much as 4’ long with a weigh of 25-30 pounds. This vine is native to moist to somewhat dry habitats including fallow and cultivated fields, roadsides, dry slopes, railroad right-of-ways, and along streams in Eastern North America from Connecticut to Ontario to Michigan and Iowa south to Texas and Florida. It typically sprawls along the ground in open areas or climbs vegetation.

This vine is noted for its large, funnel-shaped, white flowers (2"-3” across) with reddish purple eyes. Flowers bloom from the leaf axils in cymose inflorescences composed of up to 7 perfect actinomorphic (radially symmetrical) flowers from late May to September. The funnelform corolla of each flower has five shallow lobes. Simple, polymorphic (variable), olive green leaves are thin, entire, alternate, petiolate, cordate to ovate or occasionally pandurate (fiddle-shaped), with each leaf extending to 3-6” long with a pointed tip. Fruit is a glabrous, ovoid, 2-celled dehiscent capsule (to 3/5” long) which opens at maturity to disburse its hairy seeds to the wind.

Roots can be cooked and were an important food source for native Americans but fresh uncooked roots have purgative properties. Native Americans also used the roots for preparation of poultices, infusions and teas for treatment of a variety of medical problems including rheumatism, cholera, kidney disease, coughs, abdominal pains and constipation.

There are no serious insect or disease problems. Host for the sweet potato weevil. Will sometimes spread somewhat invasively in the landscape, although it has not here.

The plant provides attractive ornamental cover for fences, decks, trellises or other structures around the home. It may be grown as a ground cover or in containers. 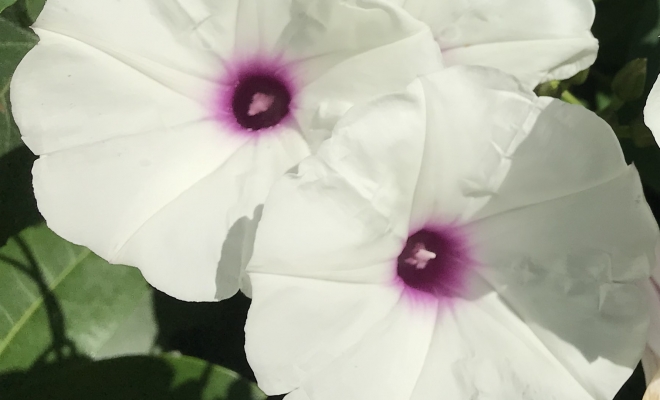