This adaptive shrub is a must have for bird lovers. Lindera benzoin, or spicebush, is a flowering shrub in the Lauraceae (bay family); native to eastern North America, ranging from Maine to Ontario in the north, and to Kansas, Texas and northern Florida in the south.

Spicebush is a medium-sized deciduous shrub growing to 5 m tall, typically found in the understory of moist thickets. The branchlets are very aromatic when crushed, hence the common names and the specific epithet "benzoin." The flowers grow in yellow clusters that appear in very early spring, before the leaves begin to grow. The fruit is a berrylike red drupe, about 1 cm long and they are highly prized by birds, as they are rich in high energy lipids (oils).  They usually finsh them off by Halloween, as they fatten up for winter. It has a "turpentine-like" taste and aromatic scent, and contains a large seed. Spicebush is dioecious (plants are either male or female), so that both sexes are needed in the garden if one wants berries with viable seed. (Though we sometimes find plants with both male and female flowers).  While typically occupying shaded, moist forest floors and wetter soils, it is an adaptable species that can grow in most soils and exposures. The leaves are alternate, simple, 6–15 cm long and 2–6 cm broad, oval or obovate and broadest beyond the middle of the leaf.

To state agian, in a slightly different manner, spicebush plants are dioecious (2 houses), which means that the flowers are unisexual, and different sexed flowers grow on different plants.  Our plants are seed grown and unsexed, so if you are a gambler, 3 plants will likely give you at least 1 female.

Regardless of sex, spicebush is a favorite food plant of two handsome lepidopterous insects: the spicebush swallowtail, Papilio troilus, and the promethea silkmoth, Callosamia promethea. The larvae of the spicebush swallowtail are easily found inside leaves that have been folded over by the application of silk; small larvae are brown, resembling bird droppings; mature larvae are green, with eyespots resembling the head of a snake. Since there are typically several broods (generations) of spicebush swallowtails each year, spicebush is a useful plant for the butterfly garden, since the egglaying females are strongly attracted to it. Promethea moth cocoons, if present, can be found in the winter, resembling dead leaves still hanging from the twigs. Neither of these insects is ever present in sufficient quantities to defoliate a spicebush of medium to large size, although very small specimens may suffer even from a single caterpillar.  Mourning cloak butterflies and spring azure butterflies both sip nectar from the northern spicebush’s flowers.

As spicebush are aromatic, they are NOT favored by deer. 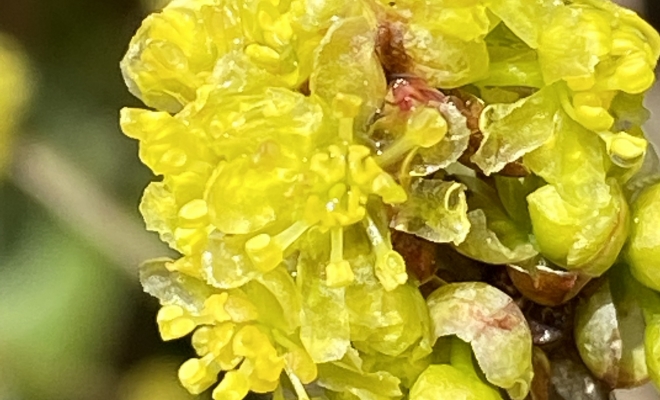