Ostrya virginiana, commonly called American hop hornbeam, is a deciduous, native tree which usually occurs in drier soils on rocky slopes, upland woods and bluffs throughout the eastern United Statea. A small to medium-sized, understory tree with a rounded crown, it typically grows 25-40' tall with a slightly smaller spread. It features birch-like, oval to lance-shaped, sharply-serrated, dark yellowish-green leaves (to 5" long). The leaves turn a gold to yellow color in autumn and often remain as brown and attached, or can drop early. Flowers are monoecious (reddish-brown male flowers and greenish female flowers appear in separate catkins on the same tree). The lowers are not particularly showy, although the male catkins are more prominent and are present throughout winter. Female catkins are followed by drooping clusters of sac-like, seed-bearing pods which, as the common name suggests, somewhat resemble the fruit of hops. Also commonly called ironwood because of its extremely hard and dense wood ('though, not durable and prone to rot).

It resembles Carpinus caroliniana, with the exception that Carpinus has the more attractive, smooth and sinewy bark. Both also go by the common epithets, "hornbeam" (hop hornbeam for Ostrya) and "ironwood", which can be confusing, as the leaves are nearly identical and both are small to medium trees.  The flowers look similar to hops, hence the common epithet, 'hop hornbeam'. 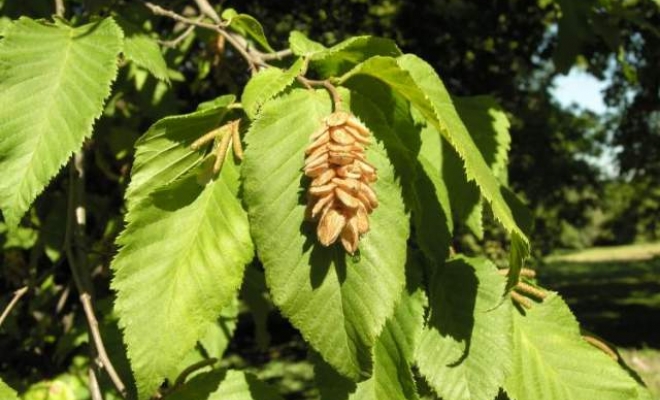