Pinxterbloom azalea is a deciduous, small leaved Rhododendron that is native to dry and moist woods, swamp margins and open areas from New England to South Carolina and Tennessee. It can be a dense, bushy shrub that typically grows 5' - 8’ (less frequently to 10’) tall. Clusters of soft pink to white to lavender, slightly fragrant, funnel-shaped flowers (to 1.5” across), each with 5 long curved stamens, bloom in April immediately preceding the emergence of the foliage. It has oblong to elliptic green leaves. Pinxter means Pentecost (seventh Sunday after Easter) in Dutch, in reference to the bloom time for this shrub. The current species name, Rhododendron periclymenoides, is synonymous with and formerly known as Rhododendron nudiflorum.  It signals the arrival of hummingbirds to our area, as the flowers are an early source of natural nectar for thr birds.

It is best grown in acidic, humusy, organically rich, moisture-retentive but well-drained soils in part shade. It tolerates dryish, sandy or rocky soils. Prefers a dappled sun or high open shade. While tolerant of sun in cool summer climates, the leaves may scorch in hot afternoon sun in hot summer climates such as the American south. Good soil drainage is essential (doesn’t like “wet feet”). Poor drainage inevitably leads to root rot, therefore raised planting areas should be considered in heavy clay soils.  Shallow, fibrous root systems (do not cultivate around plants) will benefit greatly from a light mulch (e.g., wood chips, bark or pine needles) to help retain moisture and stabilize soil temperatures. Acidify soils if needed. Clip off spent flower clusters (dead head) as immediately after bloom as practicable to allow the plant to store energy for the following year.

Ours are grown from seed and they take 3 - 4 years to reach gallon size. 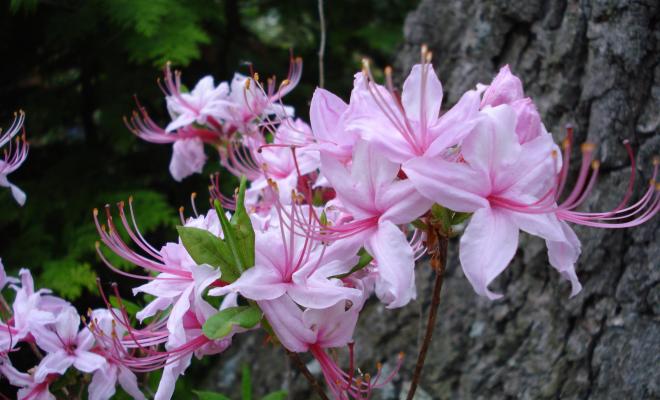