Rhododendron prunifolium blooms with spectacularly displays in late summer - later than any other North American wild azalea. Flower colors are variable between shrubs, and may be salmon pink, orange or crimson red. The individual flowers are funnel shaped, with a tube about 2 in (5 cm) long, and an opening almost 2 in (5 cm) across. They are borne in clusters of 5-8. The pistil and five stamens are very long, extending 2-3 in (5-7.5 cm) beyond the petals. The flowers are not fragrant. Plumleaf azalea is a deciduous shrub that gets 10-15 ft (3-4.5 m) high with a spread of 6-8 ft (1.8-2.4 m). The leaves are completely hairless and 2-4 in (5-10 cm) long. The buds for next season's flowers are already formed when the plant is in bloom.

Rhododendron prunifolium has a very small geographic distribution, occurring naturally only in southwestern Georgia and southeastern Alabama. It is usually found in forested, sandy ravines along streams.  This is one of the more southerly native Rhododendrons, but it is hardy to zone 5, well to the north of our area in Maryland.

Plumleaf azalea does best with morning sun and afternoon shade. The warmer the summers, the more important that afternoon shade becomes. It can be grown in complete shade, but it probably won't bloom as profusely.  Plumleaf azalea likes a moist, sandy, acidic soil. The soil should not be allowed to completely dry out. Never add lime. Hardiness: USDA Zones 5 - 9. 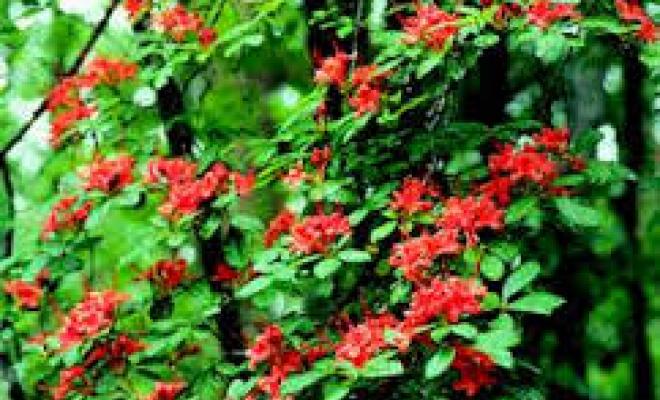