Rhododendron viscosum, or as swamp white azalea, is a loose, upright-spreading, deciduous woody shrub that typically grows to 3-5' (less frequently to 8') tall.  Branching opens up with age. It is one of 17 species of azalea which are native to the U.S. It is typically found in swamps, bogs, stream margins and wet lowlands from southwestern Maine to northeastern Ohio south to Florida and Alabama.  It may be found at some higher elevations in the Appalachian Mountains. Fragrant (musky clove-like aroma), tubular, white to pale pink flowers (1 1/4" across) bloom in clusters of 4-9 after the leaves have emerged in May-July (one of the last of the native azaleas to flower).  Each flower has 5 petal-like lobes. Narrow, obovate to oblong-ovate leaves (to 2 1/2" long) with wedge-shaped bases and blunt/short-pointed tips are clustered at the branch ends. Leaves are dark green above and pale green below. Leaves turn attractive shades of yellow, orange and purple in fall. Branchlets are hirsute (stiff hairs). Fruits are egg-shaped capsules (to 3/4" long).

The species is best grown in acidic, humusy, well-drained loams in part shade, although it is tolerant of moist to wet soils including ones with somewhat poor drainage (its native habitat is swampy lowland areas, but is usually found along wet edges). It also tolerates periodic flooding, but will not grow in soils where the roots are continuously submerged in water. Root rot is less likely to occur with this species. Prefers a sun dappled shade or high open part shade. The foliage may scorch in full sun unless soils are kept uniformly moist. Roots must never be allowed to dry out. Acidify soils prior to planting and thereafter as needed. This azalea should never be planted near a black walnut or butternut tree (roots of both trees produce toxic juglones which will typically damage or kill rhododendrons/azaleas growing within or close to the drip line of either tree). It is best sited in a location protected from strong winter winds. This shrub has a shallow, fibrous root system (do not cultivate around the shrub) and will benefit from a good mulch (wood chips, bark or pine needles) for retention of moisture, stabilization of soil temperatures and winter protection. Clip off spent flower clusters immediately after bloom as practicable. Plants will slowly naturalize by root suckers.

It can be distinguished from the other late blooming white azalea, R. arborescens in that the stamens are greenish white rather than red, and the stems are not smooth but contain hairs. 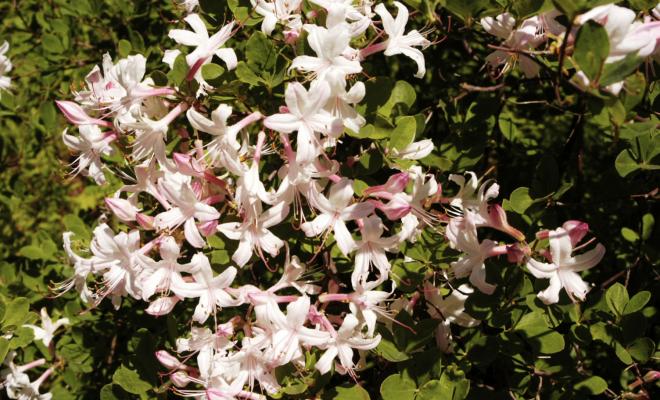