Sabatia kennedyana, commonly called Plymouth rose gentian, is a herbaceous perennial native to disjunct regions of the Atlantic coasts of Canada and the United States including parts of Nova Scotia, Massachusetts, Rhode Island, North Carolina and South Carolina. They are found growing in seasonally wet, open, sandy or peaty bogs along the margins of freshwater ponds. Mature specimens can reach up to 3' tall and can form robust colonies by underground rhizomes, reaching around 3' wide in ideal conditions. The lanceolate foliage can reach up to 5" long and is oppositely arranged along the flowering stalk as well as forming a basal rosette. A flowering stalk up to 3' tall emerge from the center of the rosettes in mid to late summer, and are topped with a branched spray of 2" diameter blooms. The flowers are made up of 9-11 pale to bright pink petals with white bases and a yellow center eye thinly edged in red.

Our plants are seed grown, with the pots placed in 3" of water. These plants should be grown in boggy soils or shallow ponds in full sun to part shade.  They resent competition, so you will have to keep them well weeded, and/or place them in a desireable habitat.

The common name Plymouth rose gentian refers to part of this species native range in coastal Massachusetts. Rose gentian is a common name given to members of the genus Sabatia, in reference to the color of their flowers and their status as part of the gentian family (Gentianaceae). 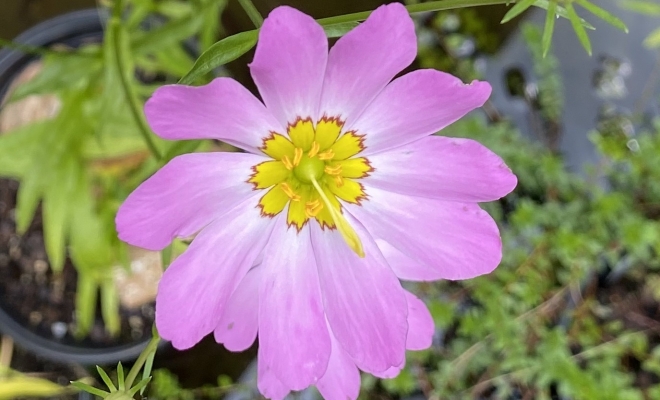